In today’s video, I’m going to be discussing how to make your rap songs more entertaining.

Sometimes we as rappers can become too self-absorbed when we’re writing our rap songs and not take the listener into consideration. It’s important to remember that our end goal is to share our music with other people in hopes that they will enjoy it. While making music is a form of self-expression we should also be thinking of ways that we can make our rap songs more relatable and entertaining to the listeners.

One thing that helps with being more entertaining is understanding some basic human psychology.  Human psychology is “the study of the mind and behavior of humans”.  In other terms, understanding the way your brain and behavior works doesn’t just apply to you, it also applies to every human being. And if you are a rapper, you are an entertainer, and it’s an entertainer’s job to captivate their audience!

And the first way you can make your rap songs more entertaining is by tapping into your listener’s emotions!

As a rapper/entertainer you are in the emotions business. It’s your job to make the listener feel something! If you think about why you remember some of the things that you do from many years ago, it’s likely because your memory is attached to some type of emotional or traumatic experience you had. For example, first-time experiences are a big one! You likely remember the first time someone stole something from you (disgusted/sad) or your first crush (excitement/admiration). You also likely remember times you did something really stupid and risked getting into big trouble (fear/excitement). If you can write a song that’s focused on one of these human emotions you will be much more likely to resonate with your audience.

For example, Dance With The Devil by Immortal Technique is a dark and heavy song that will leave you twisted up on the inside. It made such a strong emotional impact on me that I still remember the way I felt the 1st time I ever heard it! Apparently, I’m not the only one because it has nearly 50 Million views on YouTube!

Here is a list of 27 emotions you can pick from when you’re writing your songs!

1 Disgust: a feeling of revulsion or strong disapproval aroused by something unpleasant or offensive.

3 Admiration: a feeling of wonder, pleasure, or approval.

4 Excitement: a feeling of great enthusiasm and eagerness.

5 Fear: an unpleasant emotion caused by the belief that someone or something is dangerous, likely to cause pain or a threat.

7 Aesthetic Appreciation: The admiration of how pleasing something is to look at.

9 Anxiety: distress or uneasiness of mind caused by fear of danger or misfortune:

10 Awe: an overwhelming feeling of reverence, admiration, fear, etc., produced by that which is grand, sublime, extremely powerful, or the like:

12 Boredom: the feeling of being worn out by dullness, tedious repetition, etc.

13 Calmness: not showing or feeling nervousness, anger, or other strong emotions.

15 Craving: a powerful desire for something.

16 Empathic Pain: showing an ability to understand and share the pain of another.

17 Entrancement: a feeling of delight at being filled with wonder and enchantment

18 Envy: desire to have a quality, possession, or other desirable attribute belonging to (someone else).

19 Horror: an intense feeling of fear, shock, or disgust.

20 Interest: the state of wanting to know or learn about something or someone.

21 Joy: a feeling of great pleasure and happiness.

22 Nostalgia: a sentimental longing or wistful affection for the past, typically for a period or place with happy personal associations.

23 Romance: a feeling of excitement and mystery associated with love.

24 Satisfaction: fulfillment of one’s wishes, expectations, or needs, or the pleasure derived from this.

25 Sexual Desire: A motivational state and an interest in sexual activities.

26 Sympathy: feelings of pity and sorrow for someone else’s misfortune.

27 Triumph: a great victory or achievement.

The 2nd way to make your rap songs more entertaining is by Storytelling.

Since the beginning of time, we have gathered around fires to tell stories. If you reflect back to your childhood you likely remember how much you enjoyed a good story before going to bed. We as human beings love a good story! It’s in our DNA from many moons ago!

A few good storytelling songs I recommend you check out are

J.Cole Wet Dreams – This song is very realistic with a great plot twist at the end! This may or may not have happened in J. Cole’s real life. He could also be telling a story about what other kids go through. Instead of talking at kids, he’s telling a story from a kids’ perspective which makes it very relatable and powerful!

Eminem As The World Turns – On the opposite end of the spectrum, this song by Eminem is clearly not based on reality and is very cartoonish! It’s totally ridiculous and inappropriate and it displays his dark twisted sense of humor. Eminem sucks you into his crazy little world he created just for your amusement!

If you want to give storytelling a try, be sure to check out my article on how to write a song using storyboards.

The 3rd way to make your rap songs more entertaining is by writing from alternate perspectives.

I already hinted at this earlier with J.Cole but you don’t have to write every song from your perspective. Try to put yourself in someone else’s shoes and imagine what it’s like being them. In J.Cole’s song, he raps from a young male perspective and also a young female perspective. Switching perspectives is like switching camera angles in a movie or TV show. And as the songwriter, you’re the director so have fun with it!

Another good example of this is Joyner Lucas’s song “I’m not racist” where he raps from both a black and white male perspective that’s having a back and forth dialogue.

And the 4th way you can make your rap songs more entertaining is by Escapism.

For example, in the past, we’ve gone through financial recessions such as in 2008 where we had all types of businesses closing but an industry that was still thriving was the entertainment industry. There were still tons of movies coming out, comedians were fully booked doing shows, and musicians were still packing out concert venues! Many people were struggling financially at those times which made the demand to escape for just a moment even more needed and desirable!

As an entertainer, you are an outlet for people to escape at the end of a boring day or stressful week. Try to keep in mind what other people are going through and create a song that lifts their burdens for a moment or makes them forget about all that is wrong in their world. And don’t be afraid to try and make people laugh in your songs. Every song doesn’t have to be so serious. Some songs can be all about having fun!

Think of yourself as a musical chef. Your songs are the meals that you prepare for your listeners to consume and enjoy, and all of your songs don’t have to have the same taste or emotion and it’s okay for some songs to just be an appetizer or dessert. So the next time you’re writing a song consider using one or a combination of these 4 techniques to make your rap songs more entertaining. 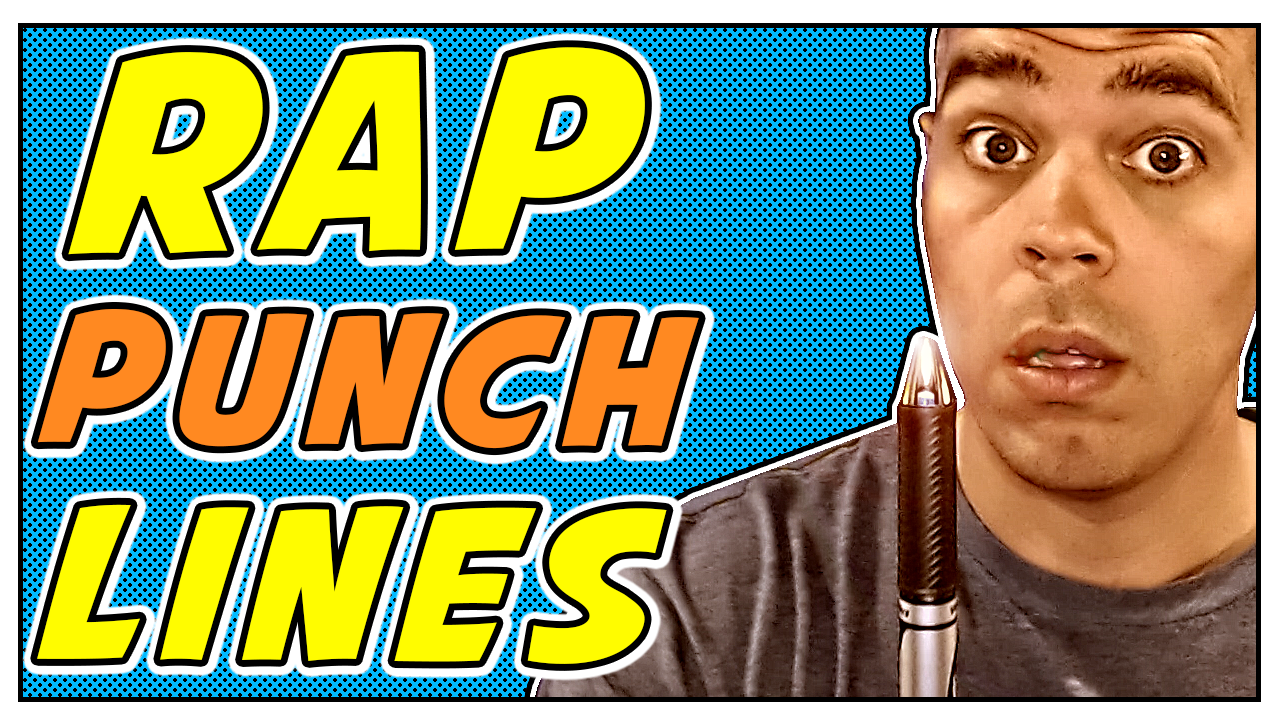 In this video lesson, I take you on a creative journey as I show you how to write dope rap punchlines from scratch! One thing you must remember is when

Sometimes the most difficult part of writing your rap songs is simply starting. We are truly our worst critics which can be good for quality control but if mismanaged this can