MAJOR Rap Flow SECRETS! | Use These Cadences To Learn How To Rap Better!

Today I’m going to share with you 3 dope cadences that you can use to add more variety and flavor to your rap flow! Each of these will incorporate 32nd notes which add a lot of snap and aggression. Also, I’ll be using triplet 8th notes which will give these cadences some of that dope modern trap sound.

I’m also very excited to announce that in a few weeks I’m going to be releasing a game-changing rap course that’s going to take your rap flow to a whole nother level! So be on the lookout for that, and if you’re watching this in the future, I’ll be sure to post a link to the course in the video description below.

Also for each of today’s examples, I’m going to be rapping over an instrumental that I produced called Midnight Drive, if you like this instrumental feel free to snatch it up over on my beat store. Now let’s get straight to it.

Now for each of these cadences, I’m going to give you two variations of each, to demonstrate how you can take quite literally, any cadence and build upon it and create more energy and movement.

That’s why I always say, never box yourself into any cadence 100% if it’s not working well with your lyrics because there are many ways you can tweak a cadence and it will still sound awesome!

For our first cadence I’m using 32 notes next to pauses and 8th notes to create a sense of tension. The 32nd notes are very aggressive but they don’t last for long which creates these short bursts of energy that quickly dissipates.

The 2nd half of the cadence is primarily filled in with triplet 8th notes. These are aggressive sounding which provides a sense of relief or resolve to the tension I created on the 1st half of this bar.

And I decided to allow these triplets to spill over into the beginning of the next bar and I kept my 8th notes in the same place as the previous bar on the 2nd and 3rd beat. Also, notice how my notes on the 3rd and 4th beats are exactly the same, this is my anchor point which gives the two different cadences their repetition or connection to each other.

For my second cadence, I’m using a similar method to create tension as before with the 32nd notes followed by 8th notes but I executed it slightly different to add even more tension!

Instead of placing my 8th notes directly on the 2nd and 3rd beats, I shifted them over to begin on the 16th note before the beats. This gave them an early swing type of feel which makes them feel rushed and anxious

And again, on the 2nd half of the bar is where I resolved the tension by extending my last 8th one 16th note longer and then filled the remainder of the 4th beat in with triplet 8th notes.

Things get really aggressive on my 3rd cadence. I filled in the entire 1st beat with triplet 8th notes followed by a 16th note on the 2nd beat. I placed a pause afterward to allow the cadence to breathe for just a moment before turning up the aggression a little more by placing two 32nd notes leading into the 3rd beat which I then repeated the same pattern on beats 3 and 4 as I did on beats 1 and 2. The only difference is I decided to place a 16th note at the end of beat 04 instead of two 32nd notes like I did on end of beat 02. I did this because I wanted to provide a little relief and rest at the end of this bar before I turn up the energy even more on the next bar.

And on the next bar, It’s primarily triplet 8th notes and I added an additional pair of 32nd notes. Also, I used my orange 16th notes to create little pockets of rest/relief on the 2nd 3rd and 4th beat in a similar fashion that I used the 8th notes from my 1st cadence.

As you can see, a big part of mastering your rap flow is learning how to control the energy of your cadences so that at times there is tension and relief. And an escalation as well as a de-escalation of energy. Without these movements, your rap flow will sound flat.

In all of these examples, I created movement within one bar. Also, the 2nd bar of each cadence had more energy than the 1st bar. 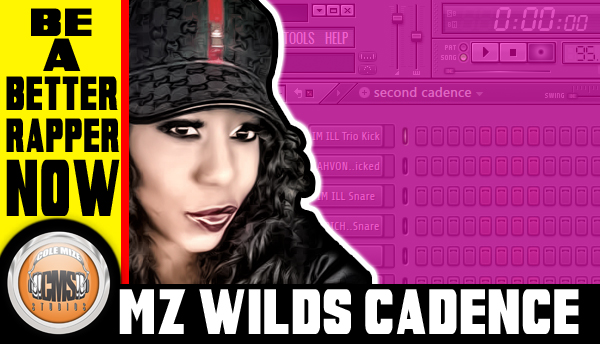 We Have A Winner! I am very excited to announce that Mz Wild won the first how to rap cadence contest. And as promised in my previous video I have made

BPM When you are learning how to rap one of the most important things that you need to grasp is how to count. By count I mean understanding how to